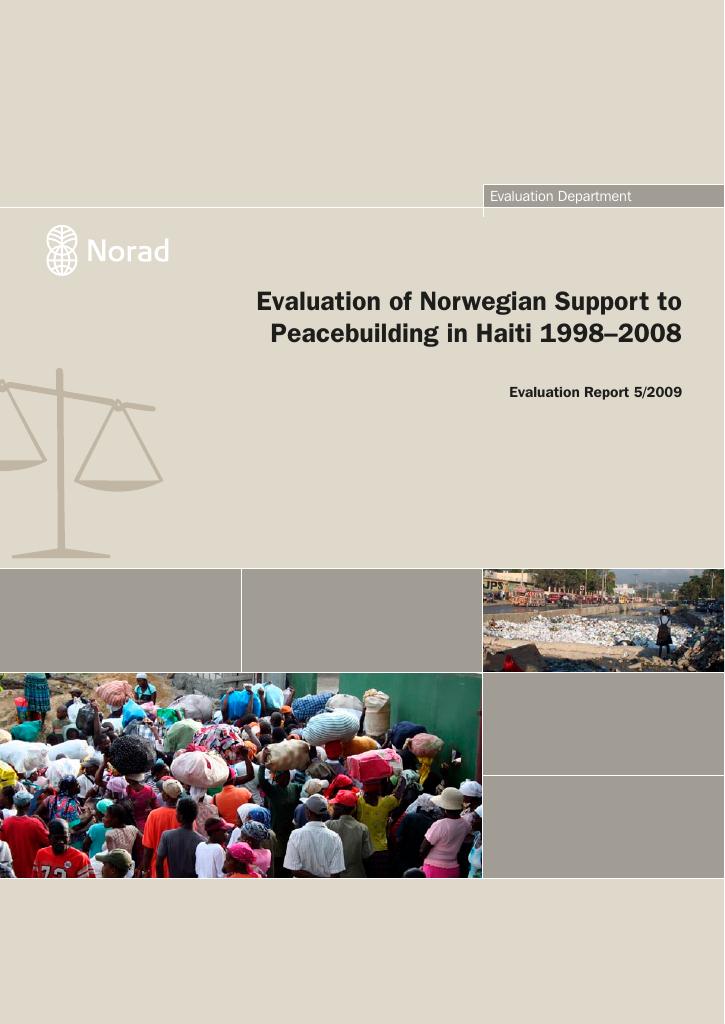 Evaluation of Norwegian Support to Peacebuilding in Haiti 1998–2008

Support to peacebuilding and conflict prevention is steadily growing within international development cooperation. The complexity of such interventions has also increased from mere peacekeeping to include state- and nation-building, as well as development activities. In an attempt to build knowledge in the peacebuilding field, donors under the umbrella of OECD/DAC have launched an initiative for more systematic evaluations of conflict prevention and peace building activities. The Evaluation Department has volunteered to contribute to this body of knowledge by evaluating our peace efforts in Haiti. Norway has been involved in Haiti since 1998. The purpose of the evaluation has been to assess whether Norway has, with its transitional assistance, contributed to increased security and stability, and whether gains achieved are likely to be sustainable. Some eyebrows were raised when questions of results achieved were part of the mandate for the evaluation. It is obviously more difficult to measure outcomes of peace efforts than of providing support to i.e. a hydropower station. But it is certainly possible to draw conclusions on achievements of such interventions, even to make meaningful statements about their efficiency, as this report shows. The evaluation team found that the Norwegian support to dialogue between political parties in the period of political stalemate from 1998 to 2005 was relevant and has contributed to reducing tensions in Haiti. Once again the Norwegian flexibility, perceived neutrality and ability to rapidly disburse transition funds for projects are commended. The team also concludes that post 2004 grassroots projects funded by Norway have improved lives of communities that have endured violence and insecurity for decades. The weakness of the Norwegian engagement is linked to planning and sustainability.The Norwegian Ministry of Foreign Affairs has lacked a systematic, programmatic approach beyond one year agreements, risking making interventions less sustainable. That may be seen as the other side of the flexibility coin. An approach that proves valuable and relevant in the early years of a crisis, may sometimes be less relevant or effective in a more long term perspective. In addition, the tale of vi Evaluation of Norwegian Support to Peacebuilding in Haiti 1998–2008  Advanced Institute for Political and Social Training (ISPOS) shows the vulnerability of an institution being dependent on one main donor. These are important lessons to take along for the Ministry of Foreign Affairs and Norad. For the general public this evaluation provides an insight into how the Norwegian aid authorities engages in a particularly volatile context such as Haiti. Asbjørn EidhammerDirector of Evaluation