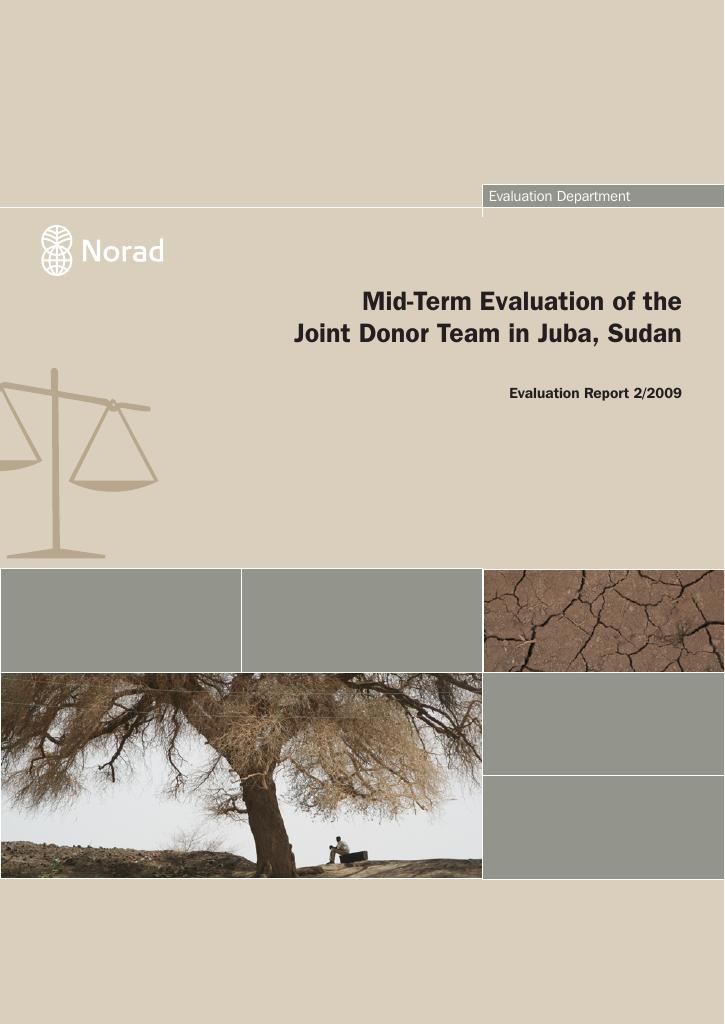 Mid-Term Evaluation of the Joint Donor Team in Juba, Sudan

Preface This evaluation has been organised by the Evaluation Department of Norad on behalf of the governments of Denmark, Canada, the Netherlands, Sweden, the United Kingdom and Norway, the partners behind the Joint Donor Team for South Sudan. The team was established following Sudan's Comprehensive Peace Agreement in 2005 in order to encourage donor harmonisation in Sudan and as a pilot for donor integration elsewhere. Its stated mission included promoting policies in support of sustainable peace and poverty reduction, support the World Bank managed multi-donor trust fund, co-operating with the Government and other stakeholders, and managing programmes outside the trust fund. Two main questions were asked: What has been the added value of the team? And how effective is the team as a working model for joint donor engagement in fragile states? Only to a limited extent have the high expectations been met. The apparent lack of success seem to be due to factors outside the joint team and the office as such. The World Bank-managed trust fund was expected to be a single aid instrument, but it turned out that almost half of the aid was taking place outside of the fund. Humanitarian aid was expected to decline in favour of long-term co-operation, but that did not happen. Management of programmes outside the trust fund remained bilateral, with the joint donor team only having responsibility for two small funds.As a model for donor harmonisation the score is moderate. It was acknowledged at the start that donors have different managerial systems and levels of delegation, but they also have widely varying approaches and have not had a single strategy for Sudan. All donor partners acknowledge - according to the report - that the governance structures have been inadequate and have performed poorly. It is worth noting that the main contribution of the joint donor team does not seem to be in the area of donor harmonisation, but related more directly to strengthening the Government. The team was successful in its support to the government in developing an aid strategy and strengthening government capacity in budget planning. It has also played a significant role in promoting policy dialogue between donors and the government, and the team has been strong in adjusting to the Sudanese context. The evaluation report comes up with a number of recommendations to remedy the situation. The main thrust of the recommendations is that donors need to strengthen their partnership by clarifying "rules of engagement", agree on key Mid-Term Evaluation of the Joint Donor Team in Juba, Sudan iiistrategic priorities for the team, give it a stronger role in monitoring, and invest greater resources in the team. The Evaluation Department has delivered the report. It is now up to the partners to consider and decide on the future of the joint donor team in South Sudan. Asbjørn Eidhammer, Director of Evaluation