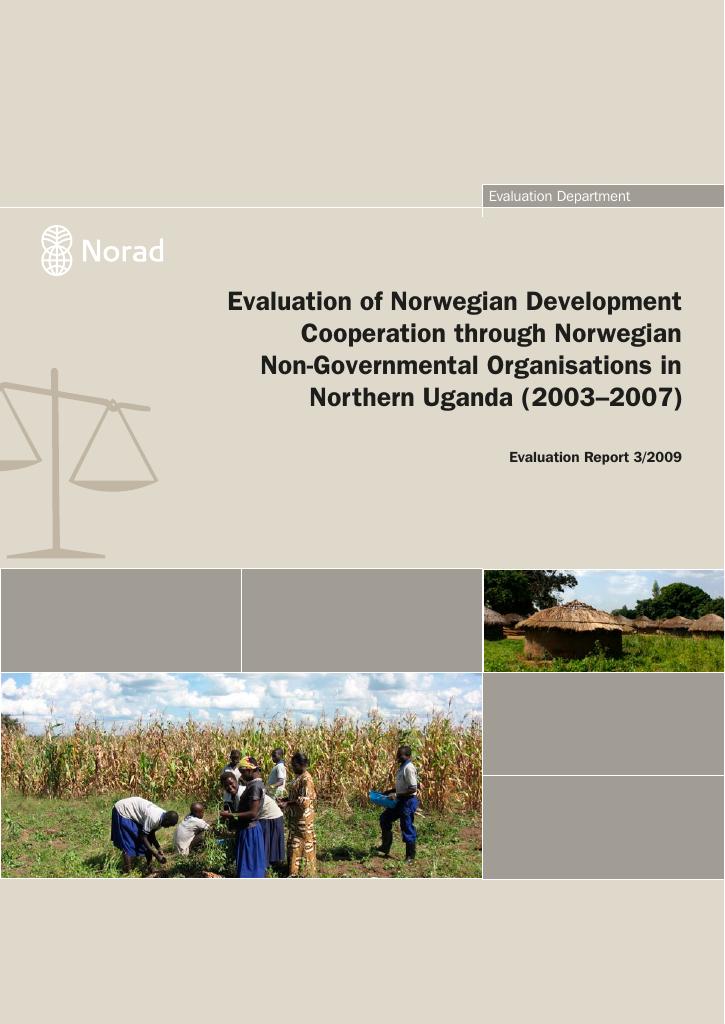 Preface In 2006 the Rattsø Commission, established by the Norwegian Government with the mandate to assess the role of the Norwegian civil society in development cooperation, recommended that the Government should take more responsibility for evaluations of the work of Norwegian Civil Society. The evaluation of development aid through Norwegian NGOs in Northern Uganda is the second country oriented report in response to the Rattsø commision. It aims at assessing the achievements of Norwegian organisations and their partners in this part of Uganda. Questions in the evaluation has been whether the Norwegian NGOs and their partner organisations have achieved their objectives and have managed to contribute positively to the lives of the people they have assisted in Northern Uganda from 2003 - 2007. This was a period marked by conflict, internal displacement, and humanitarian issues. The evaluation team discusses the outcomes of the assistance provided, the relations between the Norwegian organisations and their Uganda-based partners as well as relations with the UN and the local government. In addition the evaluation team addresses the issue of transition from humanitarian assistance to long term development cooperation as normal life is slowly returning to the people of Northern Uganda. The report documents results of the activities such as enhanced self-esteem among groups assisted, improved food security in households, improved quality of livestock, and successful introduction of energy saving stoves, to mention some of the results. However, the multiplier effects of such interventions were not documented. Education programmes has led to increased enrolment rates and improved retention of teachers. The caveat is that the potential of the structures and activities to remain effective beyond direct support from the Norwegian organisations remains doubtful. The evaluation has been carried out by the Ugandan company Image Consult Ltd, Kampala. It is the first time a major evaluation commissioned by our department - this time after a national tender process - has been implemented by a consultant in a partner country. We are pleased with the result, and trust that the report will be useful to Ugandan organisations as well as the Norwegian NGOs. May 2009Asbjørn Eidhammer, Director of Evaluation