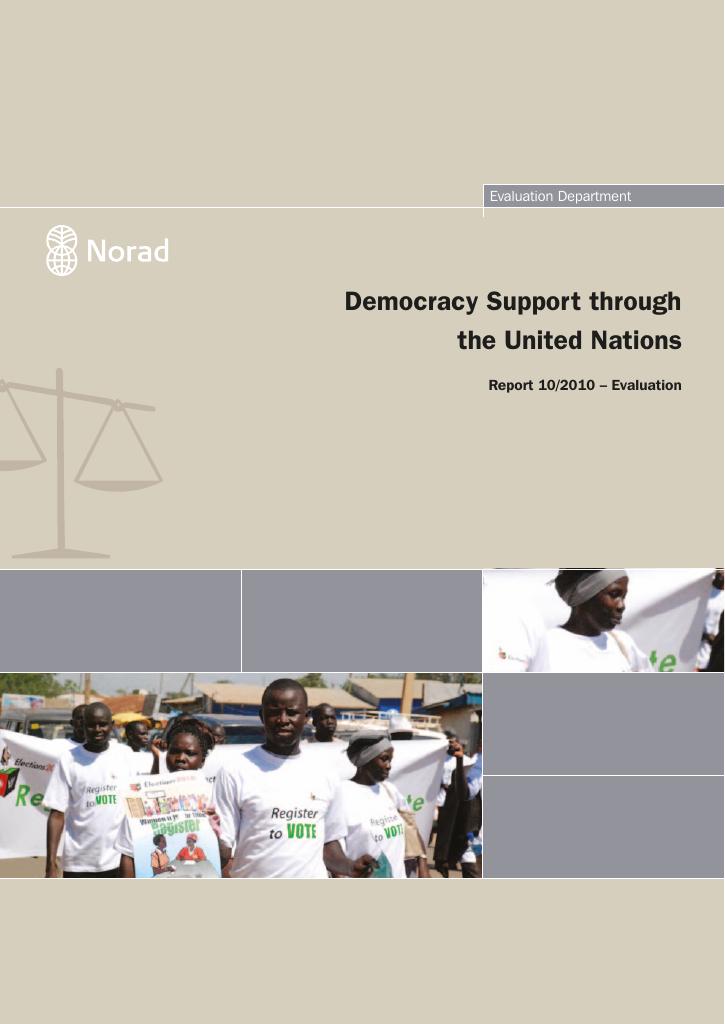 Democracy Support through the United Nations

UN measures for democratic development have received around NOK 2 billion in Norwegian support over the last ten years. This evaluation covers assistance in Guatemala, Malawi, Sudan, Afghanistan, Nepal, Mozambique and Pakistan. Most of the programmes have been in operation for 5-10 years. Purpose:To provide information on the results of Norwegian support for democratic development through the UN; to assess Norwegian decision-making processes; to advise on improvements for future Norwegian support for democratic development; and to advise on Norwegian positions vis-à-vis relevant UN organisations. Findings:The evaluation found that the support for democracy has contributed to the public debate on a democratic development in the countries studied. In Mozambique, media support through the UN has helped establish numerous local radio stations. These stations have provided information in local languages on election issues, markets and prices and health and education issues, and they have inspired a political debate. Women’s participation in designing the measures has been important. It is, on the other hand, uncertain whether newspapers have benefitted much from the measures. This programme relies on donor funding. In Guatemala, Norway has supported the indigenous population’s legal protection and civil society since 2000. Today the indigenous population’s rights have a greater chance of being heard in the national courts than a few years ago. Fifteen offices were set up to defend the rights of the indigenous population, and these offices are now being funded over government budgets. The programme for support of the civil society in Guatemala comprised 109 individual projects. Several projects were successful, while others did not achieve their objectives. The UN Development Programme (UNDP), which managed the Norwegian support, is praised for its cooperation with Guatemalan authorities.  In Malawi, the objective was to promote good government, respect for human rights and development. The projects are developed by civil organisations or government institutions. The lack of formal authority structures at the local level was a challenge for the programme. There is no comprehensive overview of the main results of the assistance, but annual reports and evaluations describe several examples of good results. Some local communities and individuals achieved a greater recognition of their rights vis-à-vis the authorities, and several organisations have been strengthened. The programme relies on donor funding. In Sudan, Norwegian support through the UN contributed to the implementation of the first internationally recognised elections since 1986. In Afghanistan, Norwegian support contributed to the country’s first elections being held. A number of local voluntary organisations and government employees have received training in how to conduct an election. The election programme in Afghanistan is the biggest individual democracy effort that Norway has been involved in. UNDP managed the Norwegian election support in both countries, and the organisation was praised for its good work under very difficult conditions. The evaluation points out that such support is particularly important in vulnerable states, where there will often be few other actors present who can stand up for democratic development principles. In Afghanistan, the UNDP was criticised for too little involvement in civil society.  In Sudan, the political and international situation has prevented amendments to the human rights legislation. Norway was criticised for not giving more definite support to the human rights work in the country.  In Nepal, Norwegian support made up just a small proportion of the support for two human rights programmes. The National Human Rights Commission was established in cooperation with UNDP in 2002, and information on 8000 cases of human rights abuse has been collected. The Commission is politically weak, however, and does not take the cases further. The High Commissioner for Human Rights has had observers in Nepal since 2006 and is to monitor the peace agreement which was signed in the same year. It is highly likely that the observers have contributed to stability through their mere presence. Of the cases which the High Commissioner has forwarded to the Human Rights Commission, few have been forwarded and fewer still have been investigated. The gender equality programme in Pakistan has contributed to the training of several hundred women politicians. The deteriorating political climate and weak coordination of the assistance have lessened the chance of lasting positive results from this training. The results mentioned above have come about after several years’ extensive support. Several of the programmes have weak systems for following up the results (Mozambique, Guatemala, Malawi), and this makes it difficult for the team to document any wider effects of the work. Norway has to a varying degree contributed to the design and follow-up of the programmes. Most of the programmes were relevant for the situation in the country at the time. The decentralised decision-making model, where Norwegian embassies allocate funds to UN organisations, often seems to function well.  Recommendations from the evaluation: The UN must continue to work for ”One UN”. This is particularly important when it comes to democracy development, where one often needs a composite and well coordinated effort from several UN players. The UN Development Programme should improve its result reporting system. Norway should become a better supporter for the UN within the often difficult field of democracy, especially when it comes to achieving a political dialogue at a high level.