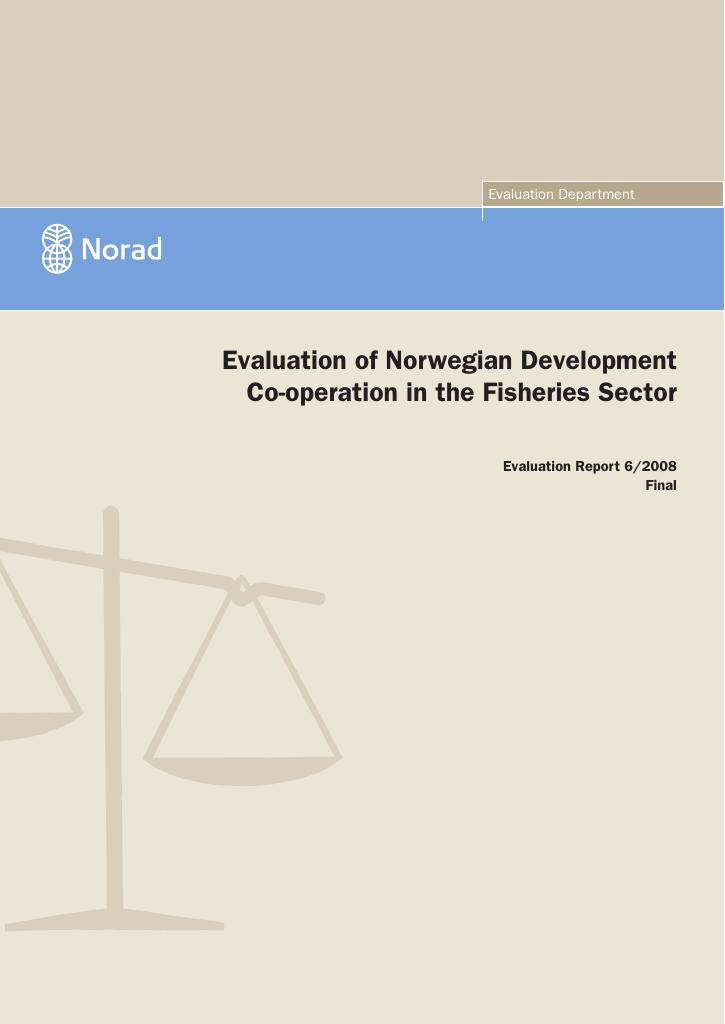 Evaluation of Norwegian Development Co-operation in the Fisheries Sector

When Norwegian development aid was initiated more than fifty years ago fisheries were an obvious sector choice. Being a country of fishermen - at least as far as our lengthy coast is concerned - should place us in an ideal position to assist poor countries in Asia and Africa to develop andmodernise their fish industry. After thirty years the results did not look so good, and the fishery sector certainly had its share of "white elephants" so often referred to in the development debate in the eighties. Our development minister could in 1988 "in no way defend ... the totally failed"Mbegani fishery project in Tanzania. And the "desert cathedral" in Turkana in northern Kenya, the plant for frozen fish that never opened, has been a welcome object for ridicule from aid sceptics ever since. Much has changed since those days. Fishery has remained an important area in Norwegian development cooperation, although one may say that 1,5 billion kroner over 20 years constitutes a rather modest share of the total Norwegian aid budget. This evaluation report explains why. Most resources have been put into key thematic areas; policy development; research, training and education - areas that are not particularly capital intensive - in addition to some investments in private sector development. The report makes an updated contribution to the development debate by assessing the outcomes and impacts of Norwegian assistance in these areas, and presents evidence from desk studies supplemented by three country case studies - Mozambique, Vietnam, and Nicaragua. The overall conclusion in the report is a positive one. Norwegian assistance in the fisheries sector has played an important role in supporting fisheries development in partner countries. The cooperation has made use of Norwegian expertise in fisheries management and resulted in strengthening the management capability at the central levels in the partner countries. Long-term expert advisors placed within institutions have also contributed to capacity development. Positive impacts on institutions were found in Namibia, Tanzania and Vietnam. Once again Norwegian cooperation is commended for its flexibility and responsiveness, and Norwegian bilateral support is considered by many involved in the sector to be one of the best development programmes in fisheries. However, some of the "usual suspects" of concerns in Norwegian development practice are again popping up. Where are the poor? Most impacts have been felt at national level, and impact is less evident at regional and local level. Poverty alleviation is difficult to determine, although sometrickle down effects in terms of job creation can be registered from private sector development projects. Some of the training has benefited individuals more than institutions. Institutional twinning has meant that areas of support could have been determined more by what Norway has to offer than by the needs of the partner countries. And finally, critical issues still to be addressed include governance, gender issues, and biological sustainability of the fisheries. Worth noting, however, is that the support to private sector projects has been effective. Companies supported by Norad has demonstrated good profitability and financial sustainability. Norfund - whose task is to invest risk capital - has made losses in the fishery sector, but intriguingly, the wider development impacts of those investments have been positive. The report argues for a continuation of Norwegian development cooperation in the fisheries sector, and contains a number of recommendations. I will only mention a few: There is a need to highlight policy implementation at local and regional levels, not to shy away from influencing agendas, and to focus on results. Further, there is a need to re-examine the balance between use of Norwegian expertise and poverty alleviation. 5 Norwegian Development Co-operation in the Fisheries Sector We are confident that this report forms a good basis for continued debate to improve our efforts in the fishery sector.