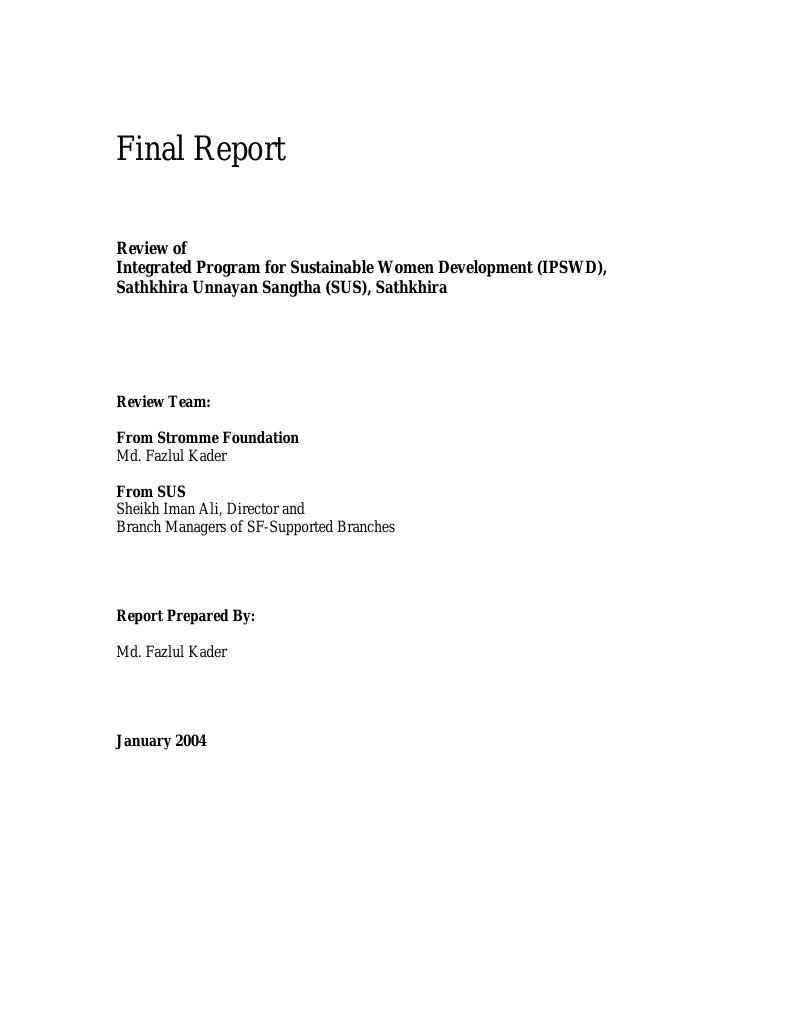 Background Satkhira Unnayan Sangstha (SUS) is one the partners of Stromme Foundation (SF) receiving funding since 2001 for its three year "Integrated Project for Sustainable Development of Women" which supports microfinance, development education and human rights in Satkhira district. SUS was established in 1982 and the core of its program is mobilization of poor women under microfinance groups and these same groups have been provided with additional services such as primary health and sanitation, awareness building regarding social issues, skills training for undertaking profitable income generating activities, which eventually led to the adoption of a 'credit plus' approach of development. Microfinance by far the largest activity, began to grow when SUS became a partner of the Palli Karma Sahayak Foundation (PKSF) in early 1990s and received funding. Purpose/objective This is a project ending review covering activities over the three year period: 2001-2003 of the project but primarily focusing on the microfinance part, with a view to assessing for further expansion of microfinance. Methodology From the out set, it was agreed that the present study would not be a rigorous quantitative evaluation but rather be a review based on discussions and observations of the activities of SUS in Satkhira, mainly in SF funded areas.The review was made on the basis of following methodology:- Visits to the program activities related to microfinance, development education and health and sanitation and observe the impact of these activities on the members and their families.- Study Accounting and MIS system both at Satani branch and Head Office in Satkhira and project documents e.g. proposal, annual reports and financial reports, and audit reports.- Discussion with staff members at both Satani branch and Head Office in Satkhira to collect their views about the program management and impact. Key findings - SUS has exceeded its targets in mobilization of members and number of borrowers maintaining nearly 100% loan recovery rate. Maintenance of such high recovery rate is very important for sustainability of a micro credit program.- Target Groups: Group members generally belong to poorer section of the community, however, some members may be slightly above the target group, which is a common phenomenon in microfinance programs all over the country due to various social reasons. Considerable degree of cohesion among the group members has also been observed during the field visits.1- Loans are given for various purposes such as vegetable cultivation, cow rearing, cattle fattening, horticulture (plant nursery), grocery shops, petty trading, fish culture, rickshaw, and poultry etc. SUS is also pilot testing micro-enterprise loans. So far SUS has been able to maintain 100% rate of recovery both in general loans as well as micro enterprise loans. Credit program supported by SF is not financially viable as yet.- Several batches of training have been completed under the project both in skills and human development areas. Members appreciated very much for giving them the opportunity of having such trainings.- Accounting system: SUS maintains all necessary books of accounts and financial reports were found accurate and maintained as per norms of microcredit industry. SUS is yet to establish a firewall between its microcredit program and other development programs. Management Information System: SUS has an elaborate reporting and consolidating system for program and financial information.- Human resources: The staff members were found skilled in microfinance management and several development training courses have been organized on such topics as credit management, logical framework analysis, strategic planning, and project monitoring and evaluation.- Impact of microfinance program: The group meetings could begin income generating activities and expand existing businesses easily accessing loans from SUS. This has created employment opportunities. Members' dependence on moneylenders has been reduced. Members reported increase in income, consumption and acquiring of assets, some have improved their housing condition.Development EducationThe review has looked into the impact of development education and training e.g. leadership development in groups, Sanitation: All members are aware of health hazards, about 60% of families have sanitary toilets. Vegetable cultivation: Nearly 80% members have vegetable cultivation/gardens around their houses. Human Rights: Members know the ills effects of dowry system and know the laws regarding the dowry issue. It appears that women are taken more seriously on family issues by their men-folk. Recommendations - Steps should be taken to make the branches financially viable by increasing membership and average loan size. Microcredit is a continuous program and it should be expanded and continued.- Planning capability needs improvement to utilize funds properly.- Regular reconciliation between its MIS information with its accounting information would help monitor project performance.- Presentation of Financial reports should comply with IAS as adopted in Bangladesh. SUS Accountants may be given training in this regard.- SUS should adhere to industry performance standards during expansion of its program.- Motivation of staff should be integrated into its Human Resource management activities. Comments from the organisation The evaluation was for the first 3-year phase of this new project. SUS being a Partner of the PKSF (whole sale lending arm of the government) it was taken into partnership with SF to bring in PKSF experience into the project supported by SF. In spite a small and rural institution SUS was able to show that a microfinance project could be operationally sustainable within 2-3 years. SUS has taken the recommendations of the evaluation into serious consideration when planning the next 5-year phase for expansion of project outreach.2